I’ve been using Pure Data for a month or two now to spice up the visuals when I stream live, and I’ve found it pretty fun but occasionally frustrating. Most of my frustration has been around finding objects (or combinations of objects) that do what I want to do. For whatever reason I’ve strugged to find specific things online so there’s a good chance that what I’ve done in the rest of this blog has been for naught, other than a learning experience for me.

The main thing I wanted was something I could use to switch between scenes I have set up. Each one has one or more gemhead objects that can be turned on or off. I had rigged something up using an hradio object and a select. Each outlet of the select outputs then went to a 1 message, and every other output went to a 0 one. Both of these messages then go in to a toggle object which is linked to all the gemhead objects for that scene. This gets very cumbersome, for example I have seven scenes I want to use, each one of these needs a 0 and 1 message, and each 0 message has to be connected to every select output except the one that corresponds to that scene. Here is a picture of the patch: 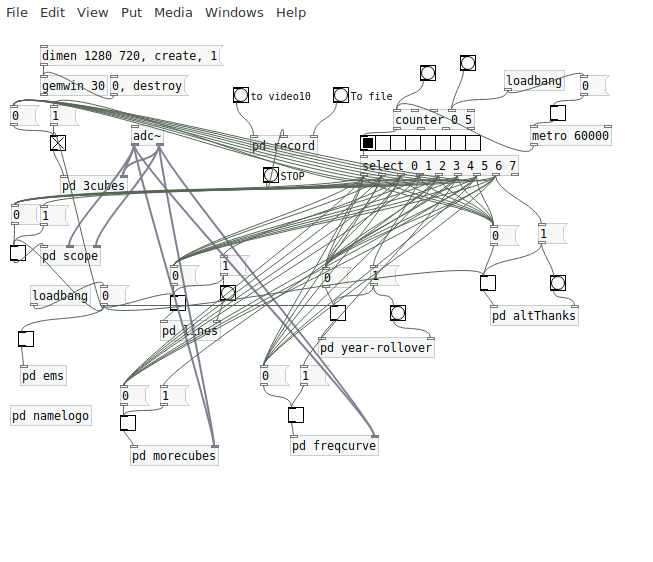 Yesterday I had a look at this excellent git repo, HOWTO write an External for Pure Data, and saw that it would be pretty simple to write an object in C, which I then did. And then I wrote a few more.

The object I created to help me with this problem is one I’ve called select8. It takes the place of the select object in this patch and has 8 outlets. Maybe one day I’ll change it to use a creation argument for the number of outlets but 8 will do for now. What it does is pretty simple. It takes in a float (such as that provided by the hradio object) and sends a 1 out of the corresponding outlet. The important change from the built in select output is that it also sends a 0 out of all the other outlets. This means that not only do I not need to have a 0 and a 1 message for every scene, I don’t need to connect the other outlets to each 0. This has cleaned it up a lot, as you can see from the screenshot below: 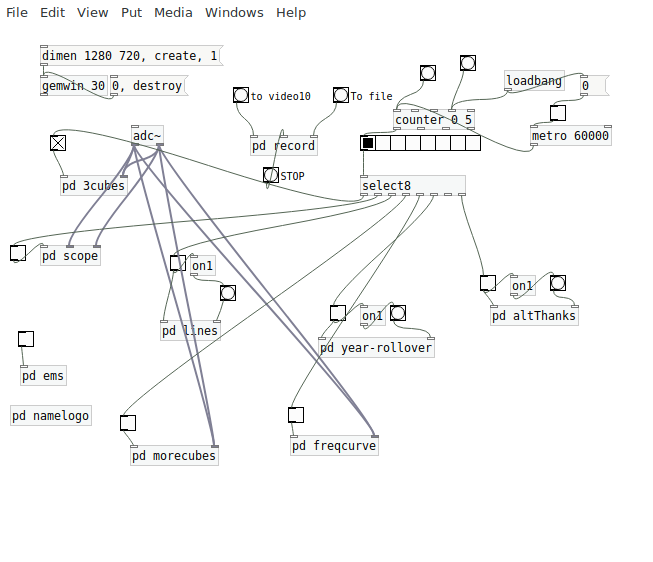 Now that I’d got bitten by the bug, I wrote some more objects. The next one was switch8, which I wanted to use with pix_video. You can only have one pix_video object for a given device and I wanted to be able to route it through different render chains, so this is what I use. It takes anything at all in to it’s first inlet, and sends it out of one of the eight outlets. Which outlet is in use is determined by a float you send to the second inlet. Like select8 the number of outlets is fixed, maybe a future version will be more flexible but that’s more than enough for me right now.

I’ve also written onchange and on1. These both take in floats, and emit bangs. onchange emits a bang when the input value is changed, on1 when the input value is just 1. I wrote these because of a side-effect I noticed after I modified select8 to advance to the next outlet when it receives a bang. I discovered that despite me using the explicit outlet_float function that would also be picked up as a bang, so I needed a way to filter these. I initially wrote onchange which almost did what I wanted, but it was really on1 that was the final piece of the puzzle.

That’s all I written for now, I’m sure I’ll write more in future. I’ve made them all freely available under the Clear BSD License over on gitlab: https://gitlab.com/benofbrown/pd-objects/